“Lucy is devoted to teaching, able to inspire joy and love for music-making, excellent at problem solving and enthusiastic about creative thinking. Her sensitivity, empathy and commitment are qualities that shine through both her playing and her teaching, making her a role model in my life.”
David Lopez, Art Dip ex student

Lucy is an internationally regarded violinist, quartet leader and teacher, living in London.

From March this year, her vibrant and busy performing schedule came to an abrupt standstill and she has since taken the opportunity to dig deeper into the ‘hows and whys’ of playing the violin, with less tension and more imagination –  and has also been learning to improvise!

She is a dedicated and passionate teacher and her quest is to enable others to find freedom and joy in their own playing.

In the new year, Lucy will start her training to become a Mindfulness teacher, and is looking forward to sharing the nutritional goodness that this will contribute to her life and work.

Lucy is an internationally regarded violinist who is versatile, passionate and expert at what she does. A graduate of York University, she was exposed to diverse musical styles and approaches, but it was early music and string quartet playing (the Fitzwilliam Quartet were in residence!), that would ultimately define her future, (pre IOM!) as a musician.

During her first term as an undergraduate, she had an ‘epiphany’ moment on hearing a baroque violin and recognised that she simply must learn how to play it. Three years later, she joined the Fitzwilliam Quartet, then playing on gut set-ups, and she has been a member since!

Other formulative experiences (whilst still a student), included being one of two solo violinists in the City of London Festival, directed by the late Richard Hickox, for a run of performances and recording of Monteverdi’s L’incoronazione di Poppea. She then went on to work for John Eliot Gardiner, touring much of the world with his orchestra, the English Baroque Soloists.

Lucy was a member of Florilegium for many years, performing and recording alongside Rachel Podger, going on to lead the group and several others – the King’s Consort and the Mozartists to name a couple. With her early music hat on, she has worked with most of the established period groups in London and recorded repertoire ranging from Monteverdi to Schumann.

Her own solo recording of Bach’s Obbligato sonatas for violin and harpsichord (with John Butt) received a five-star review from BBC Music magazine: “for sheer freshness, insight and life-enhancing joy, this newcomer goes to the top of the class alongside Podger and Pinnock, Manze and Egarr”.

More recently she recorded Beethoven sonatas with Turkish fortepianist Sezi Seskir, which has also been highly acclaimed. “Imaginatively exploiting the tangy sonorities of their period instruments, their playing is by turns gently lyrical, witty and fiercely dramatic. The famous ‘Spring’ Sonata and the shyly spoken A major Op. 30/1 – one of Beethoven’s best-kept secrets – have all the tenderness you could wish for, while the A minor Op 23 bristles with the young composer’s trademark impetuosity. A revelatory disc.” Richard Wigmore, Musicologist and critic.

With the Fitzwilliam Quartet, Lucy has performed music from Purcell to the present day, using – where appropriate – gut strings to connect with and convey the sound world of a given composer. Most recent releases include Schubert’s ‘Death and the Maiden’ and the A Minor on gut; the G Major and C Minor quartets are currently in the pipeline and due for release soon.

Performing and recording on gut is central to the group’s work. The strong association with the quartets of Shostakovich continued with a release of his last three quartets as a part of the ensemble’s 50th Anniversary celebrations (but not on gut!)

Promoting the music of living composers has always been a vital part of the Fitzwilliam Quartet’s activities, with some relationships lasting many years and involving a commitment to repeating performances of a work, beyond the initial première! InsideOut Musician composer, Liz Dilnot Johnson is one such example.

For more information about the Fitzwilliam and full discography, please visit our website: https://www.fitzwilliamquartet.com/

As a violinist who is equally at home on modern or period set-ups, I am dedicated to teaching the importance of versatility, flexibility and curiosity to my students, on any instrument!

I teach in a number of institutions: Professor of Baroque Violin at the Royal College of Music, visiting tutor at Birmingham Royal Conservatoire, visiting Professor at the University of St Andrews, Director of York University Baroque Ensemble – and I am about to begin work with students from the Purcell School, teaching Historical Performance on modern instruments. I have given masterclasses in Russia, Australia, Singapore and America to great acclaim.

Teaching is an integral part of my work as a musician. I try to weave knowledge of varying musical styles and approaches into my own playing, and aspire to bring joy, reflection and imagination to performing. As a teacher, I endeavour to enable and inspire my students, at whatever level. I encourage and facilitate others to find their own ways to ‘lift the dots from the page,’ and guide them towards greater communication through the language of music.

“Lucy Russell is a highly respected and sought-after colleague of mine at the Royal College of Music. Through inspirational teaching, this wonderful violinist is able to impart a life time of knowledge which enables her students to actively enjoy the demands of the music world.”
Dona Lee Croft, retired Professor of violin, RCM

“Lucy has all the requisites one looks for in a first class tutor: deep expertise and knowledge of her instrument and of how to get the most out of it technically and expressively, of its music, whether solo or collaborative, pre classical or modern (and all between), working with supportive tact and persuasive enthusiasm at every level from student and amateur to professional. She has a devoted following.”
Peter Hewitt, Chief Executive of Benslow Music

“Lucy Russell is one of those musicians whose performing skills are amazingly wide ranging, enabling her to demonstrate the depth of her musicianship in many fields. Whether it is as the leader of the Fitz 4tet, leading Baroque orchestras, or as a solo violinist, her versatility is at the service of her inspiring musicianship. It has always been a pleasure to share a stage with her!”
Moray Welsh, solo cellist, ex Principal Cello, London Symphony Orchestra

“Whether as soloist, chamber musician, orchestral leader, teacher or coach, Lucy Russell simply exudes musicianship. She has been an inspirational presence as Honorary Professor of Strings at the University of St Andrews: she has an unfailing ability to intuit what will most help her students, whether they have only been playing for a short while or are aspiring professional musicians. Her sharp insight – psychological as well as musical -enables her to draw the best from the amateur musicians of all ages that she works with in St Andrews, while the example she sets to her fellow professionals has enabled our concerts, opera productions and CD recordings to reach musical standards that would have been impossible without her guidance. Her warmth of personality and generosity to students and colleagues alike make her a delight to work with.”
Michael Downes, Director of Music, St Andrews University 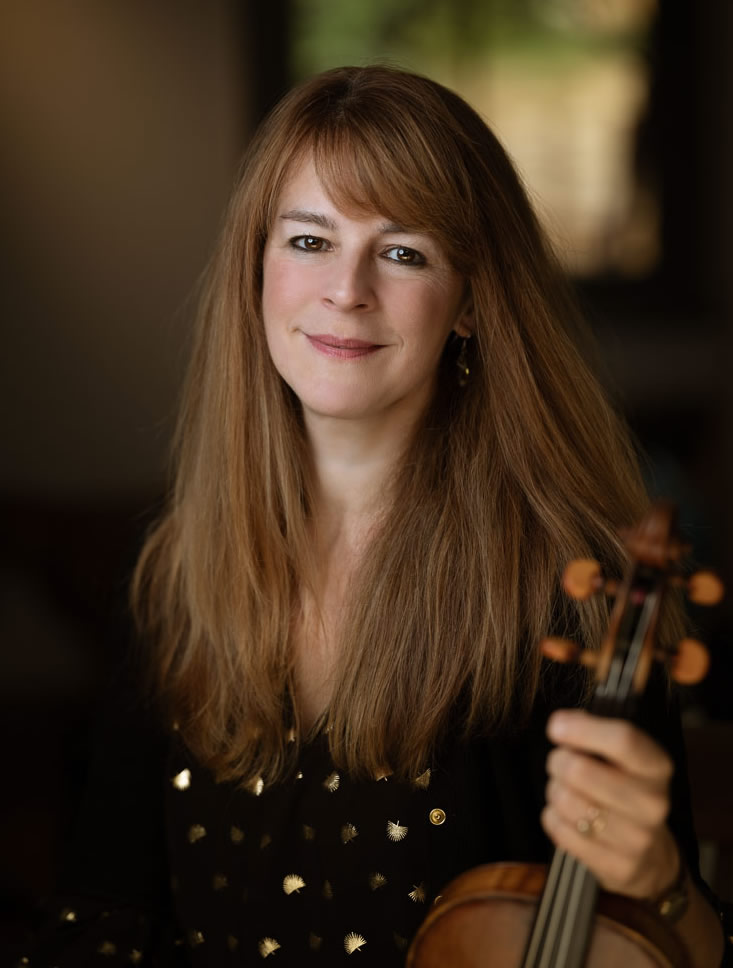 “Lucy is an inspirational presence as Honorary Professor of Strings at the University of St Andrews: she has an unfailing ability to intuit what will most help her students, whether they have only been playing for a short while or are aspiring professional musicians. Her sharp insight – psychological as well as musical – enables her to draw the best from her students.”

“The extraordinary range of her talents as a performer, teacher and thinker have inspired my work for all this time. Lucy’s ability to play period and modern violin with equal facility, flair and imagination is key to her amazing success in performing this range of repertoire … She is naturally comfortable working with young and experienced musicians. She is generous, creative, understanding, patient, demanding and challenging in equal measure.”

“Lucy is a fantastic teacher: rigorous but friendly, giving thoughtful guidance to help my own musical ideas to develop and flourish. What really sets her apart is the clarity with which she suggests improvements: every lesson, I feel I gain a clear understanding of how I can take steps to develop my interpretation of a piece, and insight into how I can refine my technique.”

“Lucy’s playing is always full of imagination and this talent is shown in her teaching as well. She can easily come up with several effective ways to solve the students’ problems after observing their playing. My playing is therefore often improved in several minutes when I follow her advice in our lessons – which I call ‘magic’!”